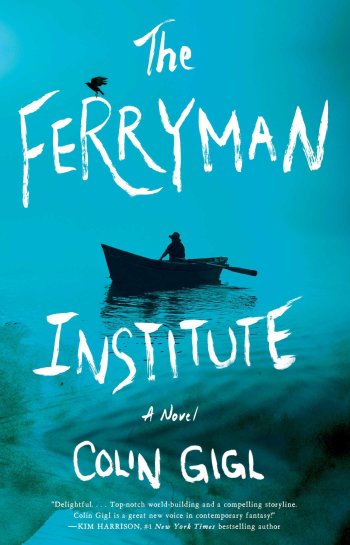 “Gigl’s writing comes to life in Charlie’s and Alice’s sarcastic or self-deprecating quips, and their hyperbolized metaphors and wacky insights will incite chuckles, even as the sadness and truth they express invite reflection.” —BOOKLIST, Starred Review

“Strong debut…Gigl successfully mixes human tragedy and comedy and creates a world worth coming back to.” —PUBLISHER’S WEEKLY

“This is a standout debut in a year filled with them.” —BARNES & NOBLE Bookseller’s Picks, Book of the Month

“Darkly funny and perfect for readers who have felt adrift in their own lives, Gigl’s debut novel spins between hilarious, hazardous, and heartfelt.” —Amazon Book Reviews, Book of the Month

“…this debut brims with wit and thrills.” —Library Journal, Debut of the Month

“…readers will find easy laughs here, but more introspection than in novels with similar premises. A wild ride with plenty to ponder, The Ferryman Institute reaffirms that it is the bitter in life that lets us taste the sweet.” —SHELF AWARENESS

Ferryman Charlie Dawson doesn’t save people. Well, he saves dead people — somebody has to convince them to move on to the afterlife, after all — just not the living, breathing sort. Serving as a Ferryman is causing Charlie to slowly lose his mind, and after 250 years he’s finally run out of the mental duct tape needed to hold himself together. Deemed too valuable by the Ferryman Institute to be let go and too stubborn to just give up in his own right, Charlie’s pretty much abandoned all hope of escaping his life with his sanity in tact. Or he had, anyway, until he saved 26-year-old Alice Spiegel’s life. Charlie never planned on saving her — that sort of thing is strictly forbidden by the Institute — but Alice is alive, and it’s the first time he’s felt right in two hundred years. Charlie’s not about to lose the only living, breathing person he’s ever saved without a fight, and he’s going to put the entire continued existence of mankind at risk to do it.